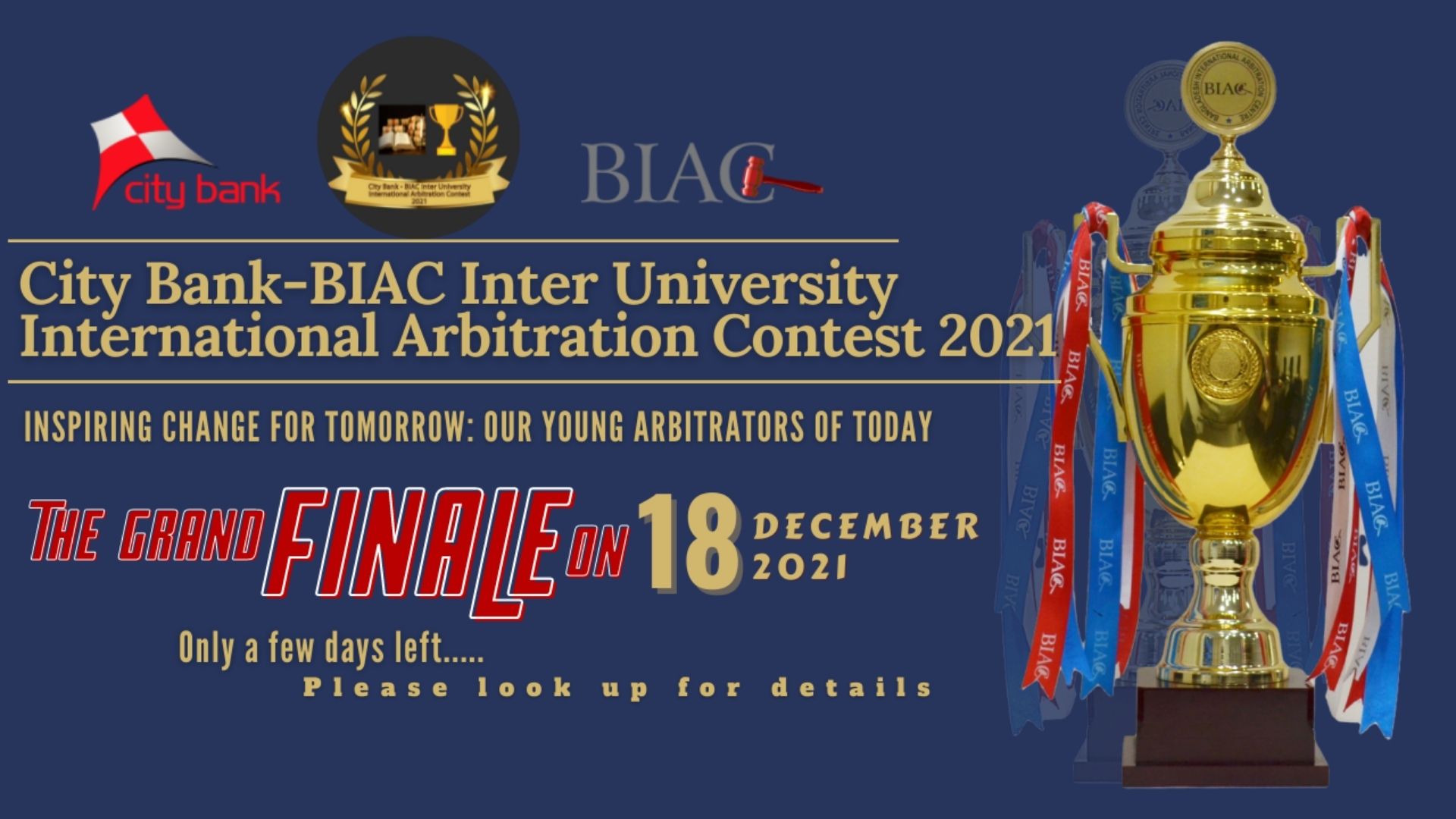 Bangladesh International Arbitration Centre (BIAC) as the country’s first and only Alternative Dispute Resolution (ADR) institution has been, over the first decade of its operation, playing a vital role to resolve commercial disputes amicably. BIAC celebrated its 10th founding anniversary on 30 October 2021 at Pan Pacific Sonargaon Hotel, Dhaka and a seminar themed “Dispute Resolution in the Virtual World: the Impact of Covid-19’’ was held on this occasion. Minister for Law, Justice & Parliamentary Affairs Anisul Huq, MP was the Chief Guest at the seminar. Mahbubur Rahman, Chairman of BIAC moderated the seminar.

Speaking on the occasion as Chief Guest Law, Justice and Parliamentary Affairs Minister Anisul Huq, MP mentioned that appreciating the recent initiatives and efforts by BIAC towards resolution of commercial disputes outside the court, the Government of Prime Minister Sheikh Hasina is considering to incorporate appropriate clauses for arbitration and mediation in all Government contracts. He highlighted that in the wake of the outbreak of COVID-19, the Government has enacted the ‘Use of Information Technology by the Court Act 2020′ to carry out trials through digital means and our judiciary has already started conducting court proceedings via video conferencing. He said that even after the pandemic, this process will continue and its jurisdiction will be expanded. He said that the Government has taken up a project on e-judiciary. He lauded BIAC’s pioneering role in virtual hearings of arbitration and mediation during the ongoing crisis period of COVID-19.

The Law Minister stated that the present Government under the competent leadership of Prime Minister Sheikh Hasina, appreciates very much the growing need and significance of ADR. Apart from the Arbitration Act 2001, in the last few years some other laws have also incorporated provisions of ADR. Moreover The Government of Prime Minister Sheikh Hasina has taken steps to ensure that both foreign and local arbitration awards can be enforced in Bangladesh and is encouraging all Government entities to choose Bangladesh at the first instance as the place of arbitration for contracts, he added. The Law Minister also said that the Government is modernising the Evidence Act 1872.

The Law Minister announced that he is working on allocating BIAC a grant of Taka 10 crore for its sustainability, which is now under process in the Finance Division.

Mahbubur Rahman, Chairman, BIAC Board in his Concluding Remarks expressed his gratitude to the Government of Bangladesh and the Ministry of Law, Justice and Parliamentary Affairs in particular for coming forward and making substantial changes towards promoting ADR in many of our laws. Over the span of a decade BIAC has been facing a rise in the demand for its services and the practice of ADR by numerous commercial organisations and business concerns as well as financial institutions in the country, he said and hoped that this demand continues in future. He urged upon the Law Minister to continue to support and encourage adherence to ADR methods in resolving commercial disputes, recovery of loan by banks and specific performance of contracts between the parties.

A. F. Hassan Ariff, former Advisor to the Caretaker Government and former Attorney General of Bangladesh in his speech said that the COVID-19 pandemic and its impact on all sectors including the dispute resolutions compelled to reconsider the way ahead to minimise the disruption in dispute resolutions by ensuring that disputes would continue to be resolved on a fair, expeditious and cost effective basis through virtual means facilitating business and commerce move forward.

Justice AFM Abdur Rahman, former Judge of the Supreme Court of Bangladesh, in his speech strongly argued that irrespective of positive steps by the incumbent Government, the non-change of mindset of some of the stakeholders is a great hurdle to advance ADR through physical or virtual mechanism. He opined that the initial stage of virtual mechanism may have some flaws on smooth proceedings of ADR, but it will be washed out through continuous use of the mechanism. An aggrieved party from Singapore may take the benefit of a celebrated Arbitrator staying in UK to resolve his dispute with a party from China, that is the charisma of virtual ADR, he added.

In his Welcome Address BIAC’s Chief Executive Officer Muhammad A. (Rumee) Ali gave a brief account of the institution’s activities and achievements during the last six years of his tenure with BIAC including introduction of Online Training Courses, Online Outreach Programmes through webinars and Virtual hearings for Arbitration and Mediation since outbreak of the pandemic. He said that being a banker by profession, ADR was a completely different field to him and the struggle to promote ADR despite having the infrastructure and capacity was quite challenging. On top of that, the pandemic has been especially difficult as it affected the earning streams of BIAC and Rumee Ali appealed to the Law Minister to save this national institution.

Mr. Tarique Afzal, President and MD of AB Bank Ltd, in his speech said that BIAC has been stirring to improve the dispute resolution environment in Bangladesh. The backlog of cases pending in the courts has long been a matter of concern for the Law makers. BIAC has a substantial role to play in this important field beyond the usual adjudication process, Afzal opined.

In her speech Ms. Humaira Azam, MD and CEO of Trust Bank Ltd. said that in this new virtual world of business, ADR has become an essential part of the DNA of dispute resolution during COVID-19. She said that BIAC has created a new horizon in this regard and we should encourage every institution to try out ADR for its own benefit.

Professor Dr. Farhana Helal Mehtab, Associate Dean, Faculty of Humanities and Social Science, Daffodil International University in her speech opined that in the virtual dispute resolution process, there is always a concern about the confidentiality and privacy of the parties’ data, hence we need to adopt a strict privacy policy under the existing legal framework. While we appreciate the robust efforts of our Supreme Court in formulating guidelines on mediation to resolve disputes, we look forward to similar frameworks on virtual settlement of disputes via ADR, Dr. Farhana categorised.

Barrister Rashna Imam, Advocate, Supreme Court of Bangladesh, in her speech insisted on adopting virtual proceedings of arbitration with a view to expediting arbitral process.

The seminar was attended among others by former Judges of the Supreme Court, Secretaries, business leaders, prominent lawyers, representatives of corporate houses, Government officials, senior executives of banks and insurance companies, academicians, and the Media. Board Members of BIAC, Rizwan Rahman, Kutubuddin Ahmed and Osama Taseer also attended the Seminar.

The event went on air live on BIAC’s FACEBOOK page and LinkedIn profile. The daily Financial Express and the daily Bonik Barta were the Media Partners of the event.