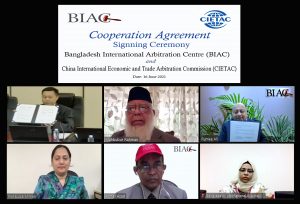 Chief Executive Officer of Bangladesh International Arbitration Centre (BIAC) Mr. Muhammad A. (Rumee) Ali and Mr. Chengjie WANG, Secretary General of CIETAC, recently signed a Cooperation Agreement on behalf of their respective organisations on Wednesday, 16 June 2021 via Zoom. Mr. Mahbubur Rahman, Chairman BIAC Board and the only Arbitrator from Bangladesh on the CIETAC Panel of Arbitrators was also present in the signing ceremony.

Addressing the event, Chairman of BIAC Mr. Mahbubur Rahman said that signing of the Cooperation Agreement will take us a long way to achieve our cherished goal of imparting training on Arbitration and other methods of Alternative Dispute Resolution (ADR) to stakeholders in Bangladesh from different agencies. It will definitely help us develop a broader human resource base to popularise and practice best internationally acclaimed ADR norms to resolve commercial disputes, he hoped. He stressed the need of further collaboration between CIETAC and BIAC to help ease of doing business and attract more Foreign Direct Investment to the country’s growing economy when we are set to graduate to a Developing Country by 2026. Our objective is to integrate ADR with the existing judicial system and contribute to faster access to justice in the field of national and international commercial disputes, he said.

CEO of BIAC Mr. Muhammad A. (Rumee) Ali, in his welcome address gave a background of mutual cooperation between CIETAC and BIAC and emphasised formalising the relation in order to further boost our economy. ADR, he said, is the most pragmatic way to resolve commercial disputes, with which end in view the two organisations will work together.

In his address Mr. Chengjie Wang, Secretary General of CIETAC extended satisfaction over BIAC’s commitment and activities to build a firm base of ADR practices in Bangladesh and the region. He hoped that Bangladesh as an important trade partner of China, will contribute more towards implementing the Chinese Road and Belt initiative in the days to come. Mutual cooperation between BIAC and CIETAC will definitely yield to positive result in resulting cross border trade, he categorised